The history of G.E.I. S.p.A. dates back to the early part of the last century, when under the name Norzi SA, founded in 1908, produces flavors and fragrances for the confectionery industry, in particular: cakes, pastries (Panettone, Pandoro Panforte, Cornetto), wine (Marsala, Vermouth), liquors and soft drinks. 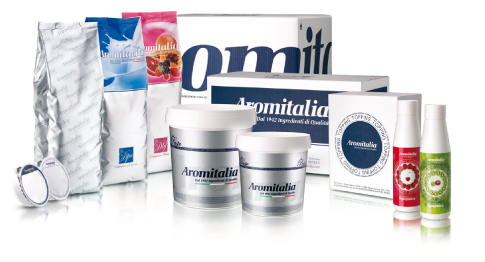 The unusual and effective approach in formulation of recipes, which tend to synthesize and simplify the intricate and elaborate process that Gelato Maestros use for the production of gelato, quickly established the foundation for success of the ingredients. These user-friendly ingredients are distributed under the Aromitalia trademark. Aromitalia products became synonymous with quality, convenience, flexibility, and in some sense a guarantee for beginners of the ancient craft of gelato of obtaining a high quality finished product.

The renowned know-how and key products have revolutionized the methods of production of artisan gelato in Italy. One of many of these is the now famous DoppiaPanna Olandese, lead many companies in the confectionery industry to turn to APE SA for the development and manufacturing of products under their trademark. In 1972, Gruppo Essenziero Italiano (GEI Spa) was founded to embody the dream of its founder Guglielmo Ferrero to create an integral company composed of brands like Aromitalia (semi-finished products for gelato and pastry), Nectar (research and development and manufacturing of essences and flavorings), Gelsystem (company specialized in the production of a new type of ice cream that is only produced in the province of Turin with more than 40 points of sale) and an efficient laboratory for high tech research and development directed by his son Cristiano. In the years following the untimely death of Guglielmo in 1974, his son Cristiano will bring GEI Spa to extend its boundaries of production and distribution: Germany in 1976, Spain in 1979 founding Aromitalia Iberica SA, Argentina in 1980 with a manufacturing factory equipped with such efficient production to provide all of South America, USA in 1997, Brazil in 1998 proposing the same production and distribution model adopted in Argentina, Mexico in 2003 founding NaturaLit Mexico SA, and Romania in 2009 directly with Helit Italian Flavor Srl. The expansion of the market, which today represents GEI and its products worldwide, will bring in 2007 a relocation from the historic site of Torino via Cigliano 31 to the new production site in Settimo Torinese with over 27,000 square meters of which 11,500 are covered.

Production commences of the first Doppia Panna Olandesa 50, an evolution of neutri

The first classic fruit and créme flavorings pastes are launched

The gelato market revolutionized by the success of the Doppia Panna Olandesa 100, the first base with 100 dosage

The Bon Bon R … is the first product sold as a set: paste + variegate

The Settimo Torinese factory is establishe

Cristiano Ferrero
President of Aromitalia
since 2007

All of our products are backed by the high quality standards that we manage throughout our production and distribution line.

We have a wide range of products. We also cover an extensive amount of unique flavors.

We provide professional and specialized advice to our clients. Our technicians and experts are ready to serve you with any questions or concerns.

Keep your newsletter consistent by cooking up recurring topics, updated with new info in each.

We are a company with solid experience in the manufacture, handling and distribution of specialized ice cream products.

FREE shipping on orders over $1000.
Coupon Code “TOGETHER”

(This is a limited time offer.)